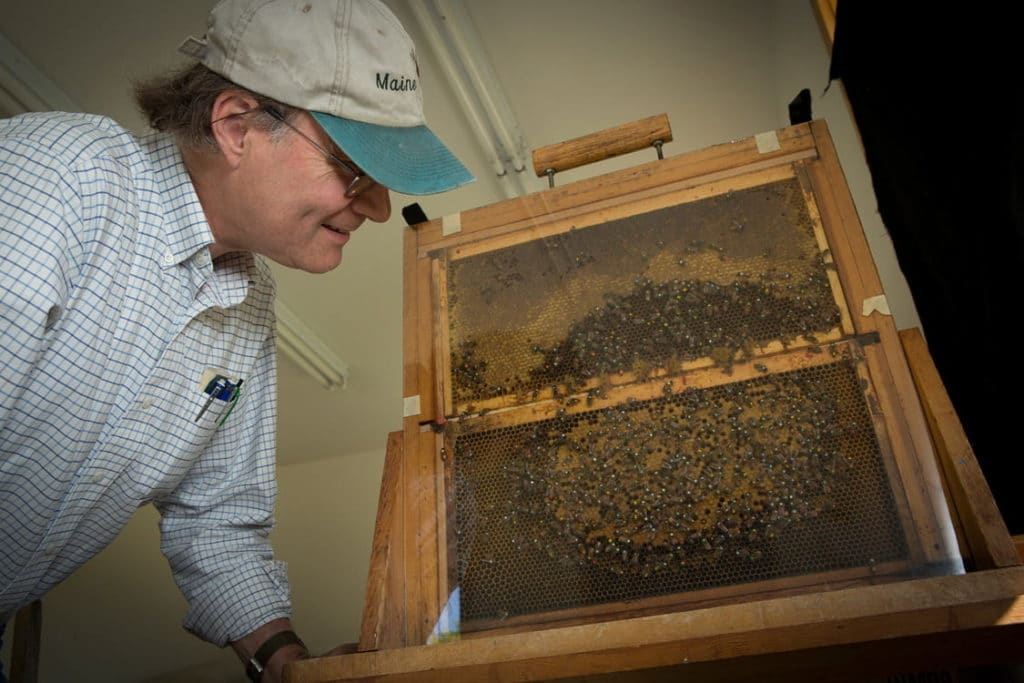 A new book by a Cornell University professor illustrates the fascinating and previously little-known biology of wild honeybees, and details management strategies for small-scale beekeepers in a changing world. “The Lives of Bees: The Untold Story of the Honey Bee in the Wild,” by Thomas Seeley, is currently the No. 1 best seller in entomology on Amazon. Seeley, a world-renowned authority on bees and the Horace White Professor in Biology in the College of Arts and Sciences,  describes how beekeepers can take inspiration from the lives of wild honeybees to build their colonies’ resiliency in this new book. Seeley is the author of other books such as “Honeybee Democracy” (2010) and “The Wisdom of the Hive” (1995), and a beekeeper in Ithaca, NY.

Honeybees perform nearly 50 percent of worldwide crop pollination, and their health has massive impacts on almost all sectors of agriculture. Managed colonies of honeybees are proving vulnerable to collapse, while those of wild honeybees are found to be much hardier.

“This is the most important insect in the world to humans, but as a whole we lack the foundation of what its basic biology is,” Seeley told the Cornell Chronicle.

The book takes a deep look into how the genetics and lifestyle of wild bees affect the durability of their colonies, and how the information gleaned can be applied to the maintenance of managed honeybee colonies.

One such example is the management of Varroa mites that transmit deadly viruses to bees. Certain management strategies for domestic honeybees, such as moving frames between colonies, can even aid in the spread and establishment of Varroa mites, while the natural selection of wild honeybees has led to genetic adaptations for defending against mites.

Seeley proposes listening to the advice of the wild bees and following a Darwinian beekeeping method, that takes advantage of the benefits of natural selection, a strategy that applies to small-scale beekeepers rather than large ones. He similarly advises keeping smaller hives, allowing them to swarm, and ending the use of toxic and expensive chemical treatments against mites. These approaches may help beekeepers keep hives that are less vulnerable to collapse and are more sustainable both economically and ecologically in the modern world.

Learn more about this book from the Cornell Chronicle.

Nina worked as a student intern for the Small Farms Program in 2019. She is a 5th year undergraduate student pursuing an independent major in agroecology in an effort to gain a nuanced view of the social and scientific sides of agriculture. She hopes to work to aid small farmers in adopting agroecological growing practices.
Posted in News and Updates