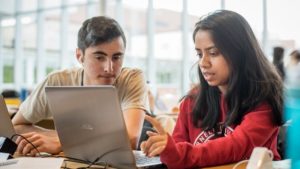 For the first time ever, a Cornell Hackathon was devised to deal with agricultural issues. This event, which took place on March 1 and 2, combined departments across Cornell University including computer, food, animal, and agricultural science. Focusing on the growing need for increased food production, the hackathon addresses a looming global problem.

“You have to give them not just food, but good food, and you have to do this in a sustainable way without harming the environment,” Ranveer Chandra explained to the Cornell Chronicle. “How are you going to grow more food without harming the planet? That’s the challenge that all of us need to get together to solve.” Chandra ‘05, is the chief scientist at Microsoft Azure Global, and an important guest at the hackathon. With a broad range of topics covered under this prompt, the students were free to be innovative in their choice of issue and its solution.

This ambitious idea was rewarded with impressive results. Over the 36-hour event, 26 teams divised of 140 students feverishly worked away on lines of code, business planning, and market research. By the end of the event, 10 teams were named finalists and 5 were awarded prizes. Projects were scored on a number of criteria including originality, feasibility, impact and data collection/analysis.

The top prize of $2,000 was awarded to a project called InsectInsight. The project, comprised of a business startup and an app, addresses a growing need for feed-grade insects used on fish farms. InsectInsight allows fish farmers to grow their own insects to feed the fish instead of the traditional method of buying premade meal. This will shorten the supply chain and help smaller fish farmers scale up their operations while keeping costs down. The second part of the project was an app which connected fish farmers to local food producers.

The hackathon was a clear success, both by its participation and outcomes. It marks an important step for the newly launched Cornell Initiative for Digital Agriculture.

“For students that participated, we hope the hackathon creates a path for them to deepen their engagement and take their ideas forward,” Steven Wolfe, associate professor of natural resources in CALS, and leader of the hackathon, told the Cornell Chronicle. “For CIDA, I hope it creates energy to advance relationships on and off campus.”

Read the full story from the Cornell Chronicle.