Aren’t They All Just Pines? How to ID Needle-Bearing Trees

Fall and winter are great seasons to learn about the needle-bearing trees that most people call “pines.” These trees have needles, and may also be called evergreen. Most are within the pine family (Pinaceae), but not all. These types of trees have several common features, but not all species easily fall under these labels. These species can be separated into groups and fairly easily described, but first let’s discuss some of the commonly used labels.
Evergreen is commonly used to describe these trees. This label generally applies because most of the species have green foliage throughout the year. An exception is the eastern larch, or tamarack (Larix laricina). In the context of “evergreen”, it is worth noting that although some needles are green throughout the year, all species will slough or drop some needles each year. At some point you will see brown and dying needles. This is to be expected.

Conifer is another common label for these trees. Here again this usually applies because the fruit for most of these species is a cone. However, two species in the cedar family (Cupressaceae) have a fruit that to most people looks like a berry. The fruit of eastern red cedar (Juniperus virginiana) and pasture juniper (J. communis) is technically a berry-like cone, with fleshy scales that have grown together.

These needle-bearing trees are within the pine and cedar families. All plants are classified by genus and species within a family. In NY and most of the Northeast, the genera within the pine family include: pine (Pinus spp.), spruce (Picea spp.), fir (Abies spp.), hemlock (Tsuga spp.), and larch or tamarack (Larix spp.). Similarly, the genera within the cedar family include: cedar (Thuja) and juniper (Juniperus). Each of these genera have distinguishing characteristics. All the species of these genera typically have more than one common name. Any good tree identification book will list the variety of common names. Similarly, full details of identification to the species level are left to a good book, such as referenced below. 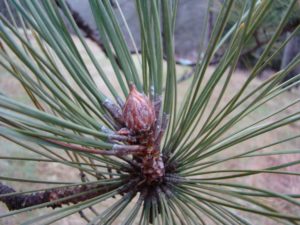 Figure 1. Red pine has two needles per fascicle, a persistent fascicle sheath, and a bulbous bud Courtesy of Peter Smallidge.

The most definitive feature of pines is that the needles occur in clusters of 2, 3 or 5. A cluster of pine needles is called a fascicle. One subgroup of pines are the hard pines and include Scotch pine (Pinus sylvestris), jack pine (P. banksiana), black pine (P. nigra), and red pine (P. resinousa) with 2 needles per fascicle (Figure 1) and pitch pine (P. rigida) with 3 needles per fascicle. The fascicle of the hard pines is wrapped at the base with a paper-thin layer that persists for the life of the fascicle. 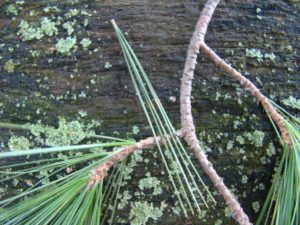 Figure 2. Eastern white pine, a soft pine, has a deciduous fascicle sheath which gives the tree a soft appearance. Courtesy of Peter Smallidge.

The only soft pine in the Northeast is eastern white pine (P. strobus). The soft pines have a fascicle sheath, but it is deciduous so it sloughs off during the first growing season of the fascicle (Figure 2). Pine cones have relatively few scales when compared to other genera of Pinaceae. All of the pines are intolerant or mid-tolerant of shade, so will typically require moderate to high levels of sunlight to survive. 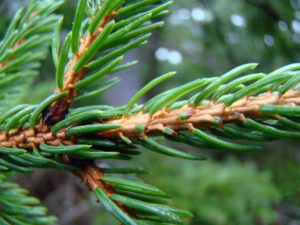 Figure 3. The foliage of red spruce (pictured) and all spruce are connected to the twig on a sterigmata. The sterigmata persist after needles drop and appear as peg-like projectcions. Courtesy of Peter Smallidge.

The distinguishing feature of all spruce is the presence of sterigmata. Sterigmata are post-like structures or projections on the stem to which the needles attach (Figure 3). These structures are most easily seen on sections of twigs closest to the main stem, after the needles have dropped. They are visible with the naked eye at approximately 1 mm (1/32”) long. Spruce are also identified by have a four-sided needle, and needles that occur singly on the sterigmata (not clusters as do the pines). Spruce have a greater density of scales on the cone than do pine, and cone length helps differentiate among the species. From smallest to largest cones, native spruce include: black spruce (Picea mariana), red spruce (P. rubens), and white spruce (P. glauca). From other areas and common in yards are blue (P. pungens) and Norway (P. abies). The odor of spruce is commonly described as pungent to fetid. The spruces tend to be more tolerant of shade than the pines, though they grow well in sunlight. 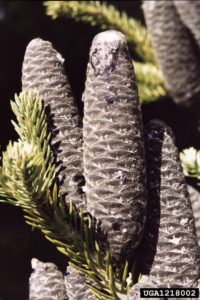 Figure 4. The cones of balsam fir are erect, and at maturity the scales break away and leave a central stalk. Courtesy of Bill Cook, Michigan State University.

The needles of fir are similar to spruce in their singular attachment, not clustered, to the twig. One distinguishing feature of fir is that the needles are attached directly to the twig, and when they drop they leave behind a slightly raised circular pad. Another feature of the genus, and thus of New York’s one native and common fir, balsam fir, (Abies balsamea), is the 3 inch upright cone with deciduous scales (Figure 4). As the cones mature they are apparent in an upright or erect position on the branches, but when mature, the scales drop away leaving a naked cone stalk. The needles are flat, and typically two-ranked or attached on the sides of the twig as wings on a plane. The odor of firs is often that of citrus, though the odor of balsam has a less pronounced citric component that others species in the genus. Balsam fir up to a few inches in stem diameter will have resin blisters on the stem that contain a sticky and aromatic pitch. Balsam fir is tolerant of shade and often grows in the understory. 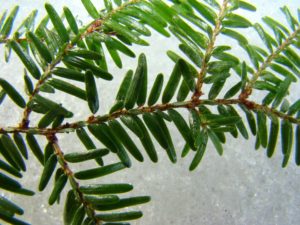 Figure 5. The two-ranked foliage of eastern hemlock includes dwarfed needles arranged on the upper side of the twig. Courtesy of Peter Smallidge.

Eastern hemlock (Tsuga canadensis) is common in much of New York and occurs in all parts of the state. Hemlock will resemble balsam fir except for three distinguishing characteristics. First, the cones of hemlock are marble-sized, pendant, and the scales remain attached. Second, the foliage has a “piney” (actually “hemlocky”) odor, but not any hint of citrus. Third, the needles, especially on eastern hemlock, are two-ranked, but also include miniature-sized needles that are attached sporadically on the upper side of the twig (Figure 5). The central leader often droops, and a purplish zone separates the layers of bark. Much notoriety surrounds hemlock because of the introduced hemlock woolly adelgid. Hemlock, like balsam fir, is tolerant of the shade. 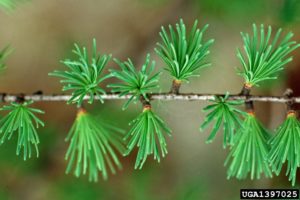 As mentioned, eastern larch (Larix laricina) is distinctive by its deciduous foliage. Like black spruce it may be found growing in the saturated soils of bogs. The foliage may appear to be clustered on stubs, known as spur shoots (Figure 6). However, the clustered foliage is a result of a branch that does not extend; the foliage that would be otherwise arranged singly on the stem are compressed into a cluster on the spur. The cones are approximately the size of those on eastern hemlock, but are held erect. Many plantations of larch occur on former farms throughout New York, but those plantations are most commonly European larch (L. decidua) or Japanese larch (L. kaempferi), both having much larger cones than the native species. 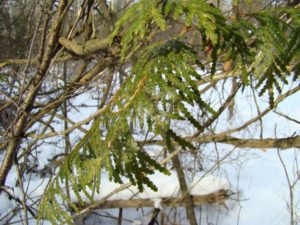 Figure 7. Foliage of northern white cedar is glossy and succulent in appearance. Courtesy of Peter Smallidge.

Northern white-cedar (Thuja occidentalis), as all members of the cedar family, are distinguished from the pine family by the modified needles. The modified needles are described as keeled, meaning the needle is flatten and folded to create an edge along the center of the needle (Figure 7). A written description that provides visualization is challenging; perhaps consider a dense strand of green waxy beads, melted and pressed flat. The cones are distinctive, and to some appear as miniature wooden roses. Northern white-cedar is common in bogs and on dry ground, and is tolerant of shade. It may grow in dense stands that provide winter cover for deer, and is browsed heavily by deer. The wood is light and the most rot resistant of the conifers. Atlantic white-cedar (Chamaecyparis thyoides) is restricted to coastal areas of the state. 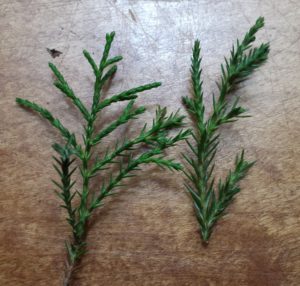 Figure 8. The foliage of redcedar may be scale-like as the upper-end of the left branch, or awl-like. Courtesy of Peter Smallidge.

The junipers have two types of needle structures, one is linear and awl-like and the other is scale-like (Figure 8). Juvenile and vigorous shoots tend to have awl-like foliage. Eastern redcedar (Juniperus virginiana) will attain tree size and occurs in most counties of the eastern United States. Pasture juniper (J. communis) only occurs as a shrub, usually on infertile soils, and only has the awl-like foliage and in whorls of three. The berry-like cone of pasture juniper may be twice the size of that of eastern redcedar.

Tree identification can provide countless hours of fun, and maybe a bit of frustration. Start with a good book, practice on specimens you know, and make a collection of numbered twigs to test yourself and friends that come to visit.

This “How To” was prepared by Peter Smallidge, NYS Extension Forester and Director, Arnot Teaching and Research Forest, Department of Natural Resources, Cornell University Cooperative Extension, Ithaca, NY 14853. Support for ForestConnect is provided by the Cornell University College of Agriculture and Life Sciences and USDA NIFA.