In the News: Farm Ops Featured this Veteran’s Day

The Farm Ops project of the Cornell Small Farms Program provides expertise and community for veterans interested in agriculture across New York State.

Connecting veterans with the Armed to Farm conference is often a first step in providing agricultural training and farm tours. If veterans want to make the transition into farming, the Small Farms Program provides a central location to the program with Marine Veteran Dean Koyanagi heading up the Farm Ops program. 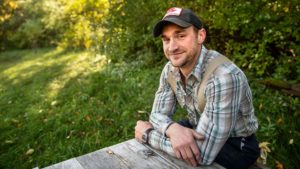 Logan Yarbrough served as s Staff Sgt. and a light infantry squad leader in the Army from 2007-15. He raises meat goats on a 40-acre farm in Brooktondale, NY.
Credit: Lindsay France

Grants, workshops, reduced rates for online classes, regional networking, and other resources all aid veteran farmers throughout the state. A recent article in the Cornell Chronicle tells the stories of several veterans that have benefited from Farm Ops.

Logan Yarbrough, Army veteran, has a 40 acre goat farm in Brooktondale, NY. He knows he made a 30% profit margin after Farm Ops set him up with a free accounting consultation with Tompkins County CCE. Regional networking proved instrumental when from a simple forwarded email came with thousands of dollars of equipment from a retiring goat farmer in the area.

Veterans can tap into both the Farmer Veteran Coalition and Cornell Small Farms Program Farm Ops when starting their farm.
Veterans often find farming a satisfying career; a high-risk, ever changing business requiring tough, hands-on labor is often a challenging and rewarding transition. Farm Ops has already trained over 800 veterans in the last three years and offer continuous support to veteran farmers.

In celebration of Veterans Day, a number of other news outlets reported on the work of our Farm Ops program. Read more:

Kelsie is from southwest Missouri and grew up on a 150-acre farm helping her family buy and sell horses and cattle. She credits FFA for finding her passion for agriculture and food issues and desiring a career as an “agvocate.” Since coming to Cornell, she has gained interest in local production, global food issues, and environmental impacts of and on agriculture. She joined the Cornell Small Farms Program in May of 2018 and is excited to gain experience to complement coursework in the Agricultural Sciences major and Communication major.
Posted in Farm Ops, News and Updates