Dairy Farmer? Watch out for the alfalfa snout beetle.

Untreated, alfalfa snout beetle is costing Northern New York farmers with 100-cow dairies between $30,000 to $60,000 per year every year, depending on the size of the pest infestation and the speed of alfalfa stand loss. The pest has been identified in nine New York State counties: Cayuga, Clinton, Essex, Franklin, Jefferson, Lewis, Oswego, St. Lawrence, and Wayne counties, and in Ontario, Canada.

The current cost of controlling alfalfa snout beetle with biocontrol nematodes in a single application for multi-year control is $28 per acre plus the cost of application by the farmer or a custom service.

Biocontrol nematode applications must be made before September 15. Best results are obtained by applying to alfalfa fields in their seeding year or first production year. Three to five are needed to totally inoculate a farm with nematodes to reduce the snout beetle population to a manageable level. Learn more atwww.alfalfasnoutbeetle.org.

“Even with the terrible milk prices farmers are currently facing, the cost of biocontrol nematode application should be weighed against the cost of not protecting your alfalfa crop,” says Dr. Elson Shields, the Cornell University entomologist who pioneered the biocontrol nematode solution to combat alfalfa snout beetle and that now appears to be useful for protecting other crops. 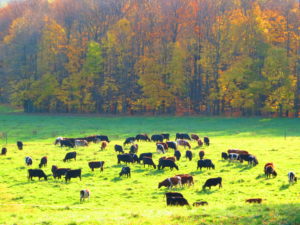 Stockpile grazing in October at the Bishopp Family Farm. Photo by Troy Bishop.

3.  the resulting impact on farm CAFO plan from increased phosphorus brought on farm with increased purchases of protein-like soybean meal.

When a nematode-treated alfalfa field is rotated into corn, research has shown a positive impact on reducing wireworms and corn rootworm.  After 4 years of corn production, research has shown that the biocontrol nematodes remain in the field at sufficient populations to provide continual control of alfalfa snout beetle.

A long-term research commitment by the farmer-driven Northern New York Agricultural Development Program supported the development of the science needed to pioneer the use of native nematodes, tiny insect-attacking worms, as a biocontrol to suppress the spread of alfalfa snout beetle. Subsequent research funded by the Northern New York Agricultural Development Program, New York Farm Viability Institute, and others is showing application of the biocontrol nematodes for controlling berry pests, white grub, and other crop pests in New York State and elsewhere in the U.S.

More information can be found here.

Kelsie is from southwest Missouri and grew up on a 150-acre farm helping her family buy and sell horses and cattle. She credits FFA for finding her passion for agriculture and food issues and desiring a career as an “agvocate.” Since coming to Cornell, she has gained interest in local production, global food issues, and environmental impacts of and on agriculture. She joined the Cornell Small Farms Program in May of 2018 and is excited to gain experience to complement coursework in the Agricultural Sciences major and Communication major.
Posted in News and Updates