Climate change is here. Is your soil ready?
Carrie Koplinka-Loehr
When Grant Gayman straddles the boundary line between his backyard and his neighbor’s cornfield in Waynesboro, Pennsylvania, one boot is on his own turf and the other rests a step down — a whole 12 inches lower — in the dirt. Fifty years ago, when Gayman’s house was built, his land and the farmer’s field were at the same elevation. But wind, tillage, rains, and lack of replenishing cover crops have whittled away at the neighbor’s earth. America gifts 1.7 billion tons of topsoil each year to the sea and air. David Wolfe, professor of plant and soil ecology at Cornell, describes the loss per acre as enough to fill a dozen small pickup trucks every year. The rate of that soil loss is the kicker: it’s more than ten times the rate at which nature forms new topsoil.
Can’t get it back
Ideally, soil is 45% mineral (sand, silt, and clay), 25% air; 25% water, and 5% organic matter. The organic matter, which gives soil so much of its bulk, contains dead and dying leaves and other plant material, plus thousands of species of microbes and roots. According to Wolfe, “The uppermost layer of topsoil, which is the first to be eroded, unfortunately also happens to be where we find most of the soil microbes essential to decomposition, nutrient cycling, and healthy crops, and the highest concentration of plant nutrients.”
“What’s the big deal?” you might ask. “It’s not as bad as the Dust Bowl years.” You look up from reading this article and the ground is still there, with trees growing on it. The insidious side of soil loss is how slowly, yet persistently, it progresses. Gayman recalls walking snowy fields sprinkled with a dusting of soil, and his father reminding him that the wind moves soil every day, whether we can see it or not.
Wolfe describes this erosion as a fraction of an inch per year, a rate imperceptible to the naked eye. Most cropland erodes quickly because it’s plowed and left without a protective cover of vegetation. But wind and water aren’t the only culprits: Moldboard plowing, rototilling, and even turning soil with a fork hasten decomposition and decrease soil mass because they incorporate oxygen and the carbon-based organic matter actually burns up, just like our bodies burn food.
Forming an inch of new topsoil can take between two hundred and a thousand years, because the parent rock must be ground into sand particles and clay crystals. “So the two different components of soil run on very different time scales,” says Wolfe. You can build up organic matter over the course of 5, 10, or 15 years, but gaining appreciable mineral content won’t happen for generations. Do we have that long?
Climate change = heat, storms, drought
“Climate change is here,” says Anthony Buda, hydrologist at USDA’s Agricultural Research Service in University Park, PA. “For sure, global mean annual temperatures are 1.5 °C warmer now than they were in the 1800s.” He points to recent NASA data (http://climate.nasa.gov/vital-signs/arctic-sea-ice) showing that about half of the Arctic sea ice has disappeared since 1980, with potential consequences for northeastern weather patterns.
If you struggle to imagine what the climate will be like in the future, the Union of Concerned Scientists has given us a hand. Their Migrating States visualization tool (http://tinyurl.com/migratingstates) assumes that if emissions of CO2 and other heat-trapping gases continue at their existing rate, the climate in Central New York will likely resemble that of Augusta, Georgia by the century’s end. 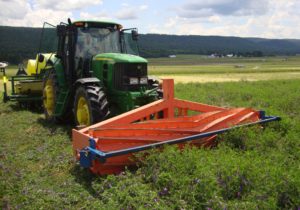 A vetch-triticale cover crop mixture is rolled and crimped to form a soil-protecting mat into which cash crops will be planted. (Photo by Clair Keene, Penn State University.)

As temperature increases, so does the water-holding capacity of the atmosphere. For every by 1°C rise, water-holding capacity bumps up 7%. One likely result will be more extreme rain storms and increased precipitation for the Northeast. Climatologists have already documented a 71% increase in 2-inch rainfall events between 1958 and 2011. Predictions are that by 2050, Northeasterners will get 5-15% more annual rainfall than we currently do, but most of the extra is expected in the winter.
Climate change can be a bit of a mind twister. If it gets wetter, how can it be drier? Most scientists think that because of the heat, the number of successive dry days will rise by 5-10% and evaporation may actually outpace inputs from rain. According to the Cornell Institute for Climate Change and Agriculture, we’re more likely to see summer droughts. With warmer temperatures and longer growing seasons, crops will need more water, but compared to past norms, summer rainfall is predicted to remain about the same or even decline.
What do soils have to do with climate change?
Healthy soils are more resilient to flooding and drought, according to Paul Salon, agronomist with USDA’s Natural Resources Conservation Service (NRCS) in Corning, NY. They drain and store water better than depleted soils, have reduced crusting and runoff, and promote cycling of nutrients and resilient crops. A key concept for growing healthy soil is to disturb it as little as possible by limiting tillage and keeping stubble on the ground. After several years, no-till fields –fields that are not plowed– will hold soil and water longer than tilled soil. The organic matter acts like a sponge, with each 1% increase in soil biomass retaining about 13,500 gallons of water per acre that can be used by crops during dry periods or heavy storms. With no-till, roots, earthworms, and other soil inhabitants create tunnels that become tiny reservoirs for water and air.
Another key concept for healthy soil is to keep it covered with living plants year-round, i.e., diverse cash crops and cover crops (crops that are not harvested and sold). Leguminous cover crops, such as peas and clovers, specialize in returning nitrogen to the soil. Others, such as winter rye and cereal rye, add organic matter both above and below the surface.
Seeking healthy soil? Fall in love with mycorrhizae
“There’s a saying that if you want to teach soil science,” quips Joel Simmons, soil scientist at EarthWorks Natural Organic Products, “You have to be dead for five years.” Simmons claims he slept through many of his agronomy classes before getting inspired about how to keep soil alive. “Soil is a living, breathing, dynamic entity,” Simmons says, describing the microbes as “little Pacmen” chomping through organic matter, making it usable for the rest of the microbes—and ultimately the plants. A pinch of healthy backyard soil contains nearly a billion organisms. That same pinch also contains miles of thread-like fungal hyphae. These hyphae colonize plant roots and provide nutrients to the plant in a symbiotic relationship known as a mycorrhiza (“fungus” + “roots”).
“I’ve fallen in love with mycorrhizae,” says Simmons. Two reasons are that the fungi mine phosphorous—an endangered resource—and their hyphae contribute to the structure of the soil. Once you build a healthy soil, you get healthy plants. “It’s the same thing as what’s going on in your body,” says Simmons. “If you’re living right, eating right, you’ll have fewer problems. If you’re livin’ on Coca-Cola and Twinkies, you’re gonna have problems.”
No-till combined with planting cover crops will add carbon to the soil, feeding the microbes that are working for you. When Jeff Moyer, executive director of the Rodale Institute, speaks to growers, he says, “We’re all livestock farmers.” It’s just that most of our teeny “livestock” live under the soil—and they’re hungry. 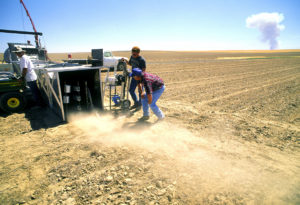 Engineers use a machine to demonstrate wind erosion on a conventionally-farmed field. Also, notice the dust cloud rising on the horizon. Cover crops, no-till farming, and other sustainability measures can help build soil and prevent erosion like that shown here. (USDA ARS Image Gallery photo by Jack Dykinga)

The crop (almost) nobody wants
About 99% of the country’s farmland stays “naked” after cash crops are harvested, meaning that only 1% of the country’s farmland gets a green cover. Why? First, the timing’s off. Farmers should plant cover crops the day the cash crop is harvested, but they’re busy on that day. Cover crops begin a new planting cycle and need to get established before the winter sets in. If farmers take the corn or soybeans off early, they’re risking a smaller harvest. Interseeding corn with a cover crop in the fall can help with the time crunch, but only if you’ve got the right equipment.
Second, the economics can look rough at first glance. Says Moyer, “When farmers look at the numbers, they see a break-even proposition. If they don’t get the yield dollar value, it’s barely break even, and most years it’s gonna cost them something.” Farmers who own their land can factor in the long-term improvement of the soil, but those who rent land often can’t justify enriching someone else’s fields.
Cover crops must be knocked down in the spring with either herbicides or a crimper/roller—a novel piece of equipment that most growers don’t own. The timing is critical: too early and you don’t get enough biomass to form a weed-suppressing blanket over the soil; too late, and you steal days the unplanted cash crop needs for growth. Furthermore, seed heads from overly mature cover crops can introduce unwanted seedlings into the new cash crop. And don’t forget social pressure. No-till fields with cover crops look more like salads than cleanly plowed, tidy rows. Weeds can be a problem, too, especially for organic growers.
Enriching the soil
David Wolfe, the soil ecologist who now devotes his work to the relationship between soils and climate change, believes that despite the challenges, there’s reason to be optimistic. Says Wolfe, “What keeps me from getting depressed about this is that there are so many people working hard on solutions, so many farmers who are getting it, so many young people who realize this is a challenge of their generation.”
All over the Northeast—with institutes like Rodale leading the way—growers are saying “yes” to no-till, cover crops, and healthier soils. In February the Pennsylvania Association for Sustainable Agriculture hosted 1,800 registrants for a conference in State College, PA. Forrest Stricker, co-owner of Spring Creek Farms, LLC in Berks County, and a 4th generation dairy farmer, spoke about transitioning to organic and maintaining a herd that’s 100% grass-fed.
Twenty years ago, Stricker’s cropland was covered only 90 days out of each year. In 1996 he stopped growing corn conventionally and converted to hay and pasture, but had to supplement his cows’ diets. He learned the hard way that his herd was overgrazing. So he pared down to 120 cows for 180 acres of pasture in 2014. Stricker lets his cows graze when the grass is 16-20 inches tall and moves them after they munch a third to a half off the plants. On nearby acreage, he began no-till and planted cover crops.
Now Stricker says he’s able to capture the rain and weather the droughts. The grass improves water infiltration and the crops shade the soil, keeping it moist while protecting it from the force of rain drops. Plant roots grow deeply, holding the soil and ensuring against dry spells. Stricker sees little runoff or erosion. He minimizes soil disturbance and compaction and maximizes biodiversity, providing the soil with living roots all year long—and he has reduced additional feed to some baleage and energy supplements. “The key to sustainability,” says Stricker, “is the soil.”
Freelance science writer Carrie Koplinka-Loehr lives in Lansing, NY.  http://naturesally.weebly.com/
For more information, view:
–Cornell Institute for Climate Change & Agriculture
-McKibben, William L., 2012. The Art of Balancing Soil Nutrients.  Acres USA.
–National Weather Service Climate Prediction Center
-Wolfe, David, 2001. Tales from the Underground, Cambridge, MA (Perseus Publishing)
This article originally appeared in the Hot Potato Press, March 16th, 2016
http://hotpotatopress.org/2016/03/16/help-your-soil-thrive-in-hotter-meaner-weather/