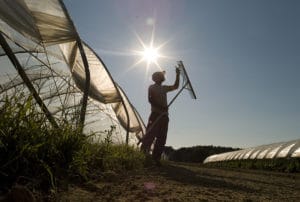 We can take steps to reduce the relative cost of Maine farm products by helping smaller farms scale up.
In the last decade, we’ve seen rapid growth in small, diversified farms that sell directly through farmers
markets, farm stands, and CSAs. Some of these farms now want to expand modestly, to increase
efficiency and be able to sell at least some products wholesale. That’s good news if we are serious about
getting more Mainers to eat locally, because the majority of consumers are going to get most of their food from supermarkets and institutions (entities that principally buy wholesale), not from direct retail venues like farmers markets. Many small farms are now exploring various ways to enter wholesale markets, including participating in ‘food hubs’ that pool products from multiple farms. These hubs—which come in many forms—begin to re-create the community-scale infrastructure that once existed throughout Maine, back when small canneries, creameries, and slaughterhouses were common.
Maine farms will also become more competitive with changes to federal policy. With a new farm bill just passed, major reform is not coming soon; but reform will come, because the public will demand it. Awareness has now grown to a point where it will not be suppressed, spread as it has on so many levels, from author Michael Pollan to the local farmer who interacts with attentive customers. Beyond what may happen in Maine or Washington, D.C., we are witnessing larger forces at work in this direction. The relative cost of food from away is slowly but methodically rising, driven ever upwards by numerous factors, including increasing fuel costs, more frequent droughts and crop-damaging storms, and the alarming depletion of the Ogallala Aquifer (which supplies 30 percent of the groundwater used for irrigation in the United States).
There’s no question that the economic realities in place a generation from now will bolster the
competitive position of Maine farms and support the kind of robust local food system advanced by A New England Food Vision. But what happens between now and then? What happens in the interim, when the most profitable use of a 10-acre parcel with prime farm soils is to drop a new house in the middle of it, with no regard for that land’s potential to feed us? What happens when current market forces do not reward farmers adequately? What happens when new farmers cannot afford to buy transitioning farmland?
If—during this critical time—we lose much more land to short-sighted development, or if we lose farming know-how because we aren’t helping existing farmers remain in business or new farmers get started, then farming here will never realize its promise. For close to 20 years, I’ve been an unabashed supporter of farming in Maine, talking up the future whenever I can. I’m still doing that. But now— amid all the excitement about farming—I make a point of stressing that not all economic forces lead in the right direction. The future we want will only be realized if we take deliberate steps to protect more farmland and provide key services to farmers—and only if we do so now, while we still have the opportunity.
When Russell Libby passed away in late 2012, many of us lost a dear friend and colleague who we relied upon for so much. In my case, I also lost someone I could talk to about the numbers. Numbers are
important: they frame what’s possible. In the 1880s, Maine farmed 6.5 million acres. Today, the figure is
about 700,000 acres. Of the remaining 5.8 million acres, only about a million acres have been lost to development. Much of what’s left has grown up in alder and pasture pine. With the right steps, that land could transform farming in Maine.
In winter 2009, Libby and I attended a gathering of farmers and researchers at Spannocchia, a farm in Tuscany where my roommate was Brian Donahue and where I, as always, talked up Maine. At first, Donahue was skeptical that Maine had the potential to feed so much of New England, but that changed the more he spoke with Libby, who held in his head all the numbers needed to make the case. “Let’s look at this closer,” they said, and A New England Food Vision was conceived. Yet numbers never capture the whole story— far from it. Libby, also a poet, knew that well. In this excerpt from his poem, “At Spannocchia,” he conveys both promise and urgency:
After seeing the terraces of the gardens,
level imposed on steepness below,
steps connecting each level at each end,
realizing this represents a thousand years of continuity,
of a shared understanding of what is to be done,
passed through time and changed through situation,
the most important step for any of us may simply be
to place the first stone.
Yes, Maine could once again feed itself, and more. But just because this could happen, doesn’t mean that it will. The future of farming here hinges on what we do now. It’s time for the people of Maine to build an expansive and enduring terrace, a foundation worthy of who we are, and then upon it, tend a bountiful garden.
John Piotti is the President and CEO of Maine Farmland Trust, a nonprofit organization that works to protect farmland, support farmers, and grow the future of farming in Maine. Since founding in 1999, MFT has protected over 37,000 acres of farmland and helped support over 400 farm families.He can be reached at jpiotti@mainefarmlandtrust.org.
Feeding a Vision first appeared in the inaugural issue of Maine Farms, the annual journal of Maine Farmland Trust, July 2014.