With support, Somalian Refugees find their way back to farming and community on peaceful ground. 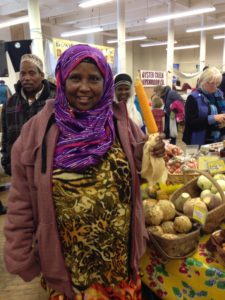 Whole popcorn stalks for sale at the Brunswick winter farmers’ market remind Mekhan Mumin of corn she used to grow back in Africa. Photo by Laura McCandlish.

It’s a crisp Saturday in mid-February at the largest indoor farmers’ market in the whitest state in America, housed in a grand old textile mill on the banks of the Androscoggin River in Brunswick, Maine. A rainbow of root vegetables and cultivated mushrooms, free-range pork and beef, local cheeses and sourdough breads abound at the market, but there’s not much visible diversity among the patrons. So it’s striking when a group of Somali Bantu refugees amble in, the women wearing bright headscarves and African prints under their parkas. But they’re not here to shop. No, these farmers have come to do market research, to learn about what types of vegetables—celeriac, golden beets and parsnips, for example — to grow and store for sale throughout the winter. Lack of refrigerators and greenhouses means the Somali farmers only currently sell to the summer markets, from the end of June to the beginning of November.
“Our biggest limiting factor is there’s nowhere to store winter storage vegetables and no growing space for winter salad greens,” says Sarah Bostick, who runs classroom trainings for the farmers and manages their market relationships and wholesale accounts. “We don’t have a real farm building, and it’s challening trying to figure out how to manage something like that, on a shared farm where the farmers don’t live on the property.”
The property is 400 acres of rolling hills and woodlands the Littlefield family had farmed near hardscrabble Lewiston since 1853. Bob and Ella Mae (née Littlefield) Packard, who inherited the land, began the process of putting a permanent conservation easement on the property in 2000. They still raise hay and enjoy traveling in the off-season. As the Packards settled into retirement, Stephanie Gilbert, the Maine Department of Agriculture’s farmland protection specialist, asked if they’d consider leasing land to the New American Sustainable Agriculture Project, or NASAP. 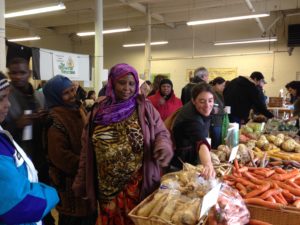 Sarah Bostick (right) guides farmers Mekhan Mumin (to her left) and others on a marketing research trip to the winter farmers’ market in Brunswick, Maine. Photo by Laura McCandlish.

Fast-forward eight years, and what started as six acres of the Packard-Littlefield Farm has swelled to a 26-acre incubator now cultivated by about 35 recent immigrant households. The families sell collectively as “Fresh Start Farms,” running CSAs and farmers’ market stands all over the region. Most are Somali Bantus who lived in refugee camps in Kenya, and now (with other Somalis) make up at least 10 percent of the population of Lewiston, a predominately Franco-American, formerly declining mill town. Other farmers here fled the conflict in South Sudan or come from Mexico or Guatemala.
At the annual Harvest Festival last October, Packard drove the farmers and their many children, the girls covered with bright pink and blue hijabs, on a tractor tour of their shared property. The kale stalks had grown tall and bare. The farmers laughed and clapped as they sang traditional harvest songs in their native Maay Maay language. Back in the Juba region of Somalia, before Civil War ravaged their villages, they’d sing as they rode for hours in an open wagon out to their fields. Their farm in Maine is only a ten-minute drive from the public housing project where many of the Somalis live—though it’s a drive that scares them in the snow. The South Sudanese farmers, who live in Portland, also tend a small satellite plot in nearby Falmouth. The families and staff shared a potluck meal featuring sautéed collards and lasagna with Swiss chard, all grown on site. They packed up curing pumpkins and winter squash for Halloween markets. They cheered their season-end accomplishments. They sang and danced to Somali music blaring from a minivan’s stereo.
Dozens of training programs for new immigrant farmers have cropped up nationwide, since the U.S. Office of Refugee Resettlement started funding such efforts in 1998. Here in Maine, NASAP began with a bent towards community organizing in 2002, soon after the first Somalis arrived in Lewiston. In 2009, it merged with existing Portland non-profit Cultivating Community, which previously focused on school and community gardens. The long-term goal is for these extremely resource-scarce farmers to eventually own and operate self-sufficient businesses. There are many hobby and community garden programs for refugees, but far fewer support farming at this scale. But many challenges must still be overcome before the NASAP farmers can fend for themselves.

Farmers Christine Pompeo (left to right), Seynab Ali, Jabril Abdi and their many children celebrate the Harvest Festival in late October with a hayride around their plots at the Packard-Littlefield Farm near Lewiston. Photo by Laura McCandlish.

“Fresh Start Farms” participants grossed over $150,000 in sales last season, but much of that goes towards transportation and supplies, let alone an hourly rate for the farmers’ labor. Funding from the USDA’s Beginning Farmer and Rancher Development Program is tied up in the Farm Bill, but NASAP has some other grants to fill the gap. Breaking into the wholesale market—finding large-scale buyers that can pay a fair price and place reliable orders—is the main challenge. Cultivating Community provides free promotional materials and expertise, helping the farmers overcome significant obstacles to access new markets. It takes the farmers a while to learn how the banking system works, and how to purchase seeds and specialty supplies from vendors less obvious than Wal-Mart, whose gardening products become very overpriced when stretched to a farm scale.

The following organizations provide support to immigrant farmers across the Northeast and Nationally.

“Even as they become better producers, actually finding the market is hardest thing, given the language and cultural barriers, and just not knowing where to even start to seek those markets out,” says NASAP project director Daniel Ungier, whose own parents fled the Soviet Union and Poland. “That’s a big part of what we do.”
Preparing seed garlic for planting last fall, Khadija Hilowle told me farming was very different back in Africa. As a Somali Bantu, she subsistence-farmed with livestock—camels, goats, cows and chickens—which made her people a target during the war. Their animals grazed freely and provided manure to fertilize crops. Hilowle and the other farmers were less familiar with compost and manufactured soil amendments. Nor did they practice succession plantings or sow cover crops for fertility. These are all techniques they’ve had to gain in Maine. Still, farming is second-nature to this agricultural people, many of whom lacked literacy in their native language.
“The reason why we’re farming is because we don’t have enough knowledge to work at other companies,” says Hilowle, who like many of her compatriots, suffers from migraines and post-traumatic stress from the torture she endured and deaths she witnessed during her country’s Civil War. “Our parents and grandparents farmed. We’re here to keep farming as a part of our culture. We have the knowledge, but the knowledge we have is different, and we left it in our country.”
It’s primarily strong women like Hilowle and Seynab Ali and Mekhan Mumin who keep the farm running full-time, with help from their children and husbands (though many are single-mothers) during the summer. They’re aided by outreach coordinator Hussein Muktar, the English translator, fix-it man and liaison between the farmers, their customers and the non-profit’s young, college-educated staff. Growing up in a refugee camp in Kenya, Muktar attended school where he learned English while working as a bike mechanic. Though not yet 30, he and his wife, Hawo, just welcomed their sixth child, Mohamed.

That same fall afternoon, Muktar tinkered with a leaky irrigation valve with Cultivating Community’s Sarah Marshall, who advises the farmers in the field. They stood in the wash station on new mats just collectively purchased by the farmers. With 17 acres now under cultivation, there’s plenty of product to move. But “Fresh Start Farms” lacks the on-farm food safety plan and GAP certification required go through otherwise receptive local distributors. The makeshift wash station needs new pipes and hosing, but just keeping it—and the farmers’ very used minivans—clean would be a good start. The problem with a shared farm is “the tragedy of the commons,” Bostick says, where one farmer doesn’t want to pick up after another’s mess.
The competitive wholesale market is also foreign to navigate for those who never eat in restaurants. Numerous African restaurants and halal markets have opened in Portland and Lewiston, but repeated efforts to sell to them have been unsuccessful. Most lack the capacity to store perishable produce. Bostick says “Fresh Start Farms” needs bigger, streamlined accounts, to limit the chaos of managing more than 20 mostly smaller ones for as many farmers.
It could take five years for the NASAP farmers to break into more popular markets like the one in Brunswick and gain the infrastructure to farm year-round. The upside is that now the farmers get that rare chance to step back in the winter, to study English, order their seeds and equipment and improve farm marketing and planning. Less worn from field work, they’re more receptive to the constant questions they incur from researchers and journalists. The Somali farmers in Lewiston have garnered coverage everywhere from the New Yorker to the BBC and are the subject of a documentary. Telling their story is perhaps the best way to grow their businesses on this slow, but steady, journey towards independence.
Laura McCandlish is a food writer and radio producer who recently relocated from Corvallis, Ore. to Brunswick, Me. She writes for The Portland Phoenix and blogs at BaltimOregon.com.